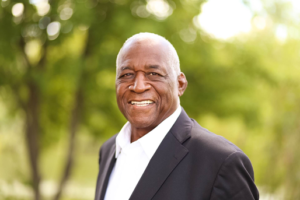 Al Hollingsworth is a business leader, international speaker, minister, author, and founder and CEO of Aldelano Corporation and Aldelano Solar Solutions. A successful entrepreneur of over 50 years, Hollingsworth’s heart is to help others succeed in the visions, dreams, and ideas God has given them.

Hollingsworth founded Aldelano Corporation in 1968 as a young black man living in Los Angeles. During this time, Hollingsworth faced extreme odds to succeed in the world of business.  Inspired by the late Dr. Martin Luther King, Jr., Hollingsworth and a few like-minded entrepreneurs created the Black Businessman’s Association in Los Angeles, California. Hollingsworth’s business became one of the first recipients of a government contract through the 8A program, which opened doors for disadvantaged businesses to receive government contracts. He worked with California’s Governor Brown and Lieutenant Governor Dymally, to eventually become Commissioner of Economic Development for the State of California.  Aldelano is currently a nationwide provider of packaging and staffing services with a client list of Fortune 500 companies.

In 1985, Al and his wife Hattie founded B.O.S.S. the Movement Ministries—a program dedicated to mentoring youth in both business skills and spiritual disciplines. Al and Hattie also started Vertical Leap, an adult training program which allows others to start B.O.S.S. programs in their communities. Today, B.O.S.S. the Movement is a series of training curricula that have been planted in nations throughout the world, producing thousands of successful leaders and entrepreneurs.

As Al and Hattie traveled throughout the world with their ministry they experienced firsthand the struggles stemming from the lack of infrastructure. The lack of power, refrigeration, and clean water – particularly in remote areas – created a daily living crisis and continued a cycle of malnutrition and poor health, poor living conditions, educational setbacks, poverty, and the inability to expand business and resources. The Hollingsworths saw that the governments were not addressing the issues fast enough and other countries who claimed to invest in the regions were getting rich while the countries themselves remained poor. Al’s heart for ministry combined with his business acumen led to the development of his most recent innovations including the Solar ColdBox – a solar-powered, industrial-sized cold storage unit that offers both refrigeration and freezing temperatures; the Aldelano Solar WaterMaker – which produces drinkable water and ice from the moisture in the air, and the Aldelano Solar PowerPak – a line of industrial-sized solar power generation systems. These products are designed to provide Instant Infrastructure to remote and underdeveloped areas, empowering small farmers and businesses to convert and monetize their own natural resources through the Power of Solar.

Aldelano has grown to become a global leader in introducing solar technologies to developing areas around the world and Al and Hattie are committed to aiding developing countries in eliminating waste and creating economic independence and growth for their people and communities.

In addition to the business and ministries, Al and his wife, Hattie, are the owners of the Alhatti Private Christian Resort in California; a 125-acre paradise used for conferences, retreats, and private events in the mountains above Palm Springs, CA.

Hollingsworth’s community and ministry involvements include the Board of Directors for Oral Roberts University, Promise Keepers, and Save Africa’s Children, and he has served as Ministry Council Member of Empowered 21, Wise Counsel, and Azusa Street Centennial. Hollingsworth has ministered with Dr. Myles Monroe throughout Africa and South America and has appeared on TBN, CBN, Day Star, and PTL.