The retired commanders recently visited Aldelano’s production facility, headquartered in Jackson, Tennessee, and experienced each product firsthand. The generals, who share a combined 14 stars and 200 years of service for our country, were so impressed with the solar technology, they began developing a master plan to model the designs globally. Each officer has coordinated international and local military relief efforts, leading hundreds of troops, affecting countless lives. 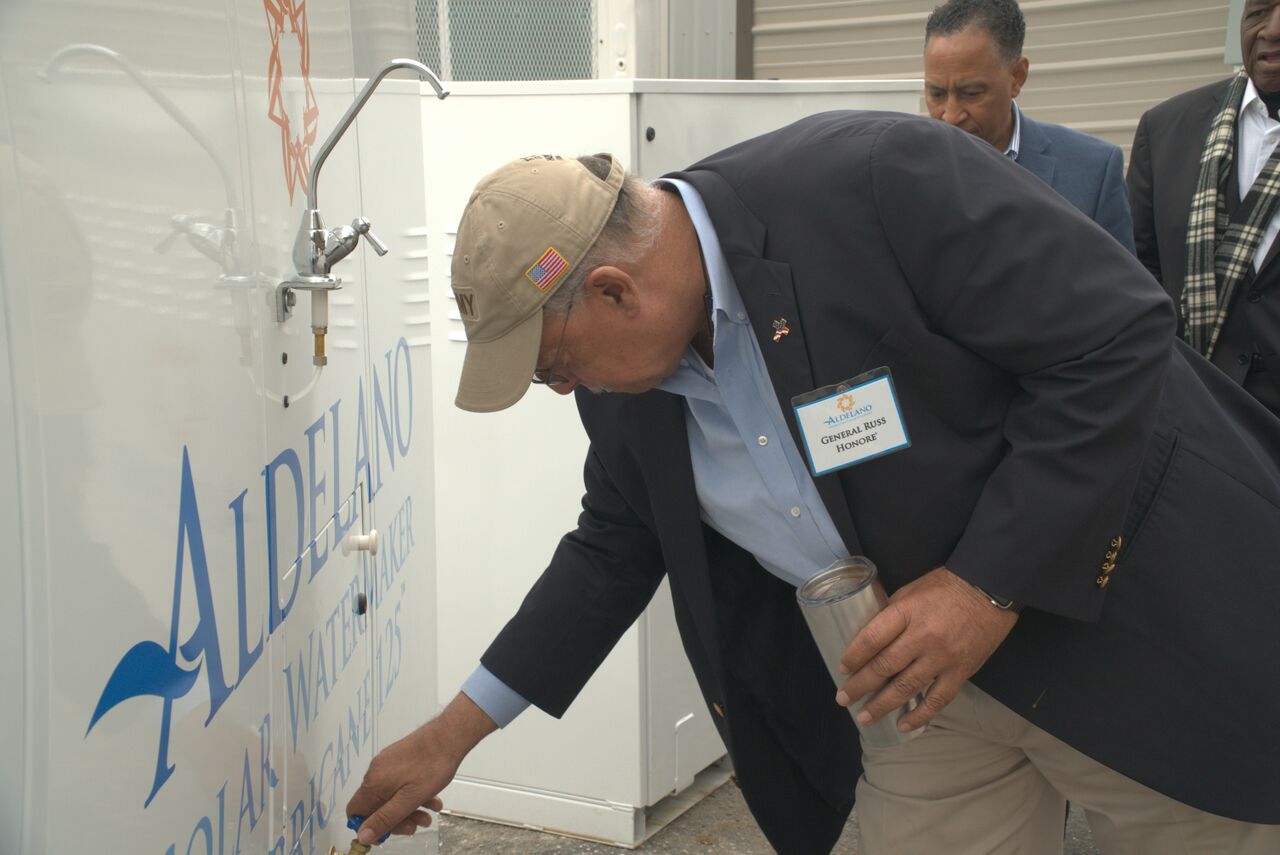 Retired Lt. Gen. Russel L. Honoré, who commanded the military response to Hurricane Katrina in New Orleans, immediately thought of his native state, Louisiana. “We’ll put a camera on it that will watch people come and get water in the town of Tallulah, Louisiana … the poorest part of Louisiana where people are drinking brown water! This product is a need,” Honoré said. The team will also present the technology to U.S. ambassadors from various African nations.

Global Weather Oscillations predicts the 2018 hurricane season will be the strongest cycle in 70 years. Aldelano Corporation CEO Al Hollingsworth said now is the time for all nations to prepare. “My wife and I have done missions for decades. We’ve seen despair. We’ve seen disease. We’ve seen death. Our technology was born out of a need for anyone, anywhere to have life’s necessities, harnessed by earth’s natural resources,” said Hollingsworth.

Because of the historic military visit, Aldelano Solar Cold Chain Solutions is searching for municipalities to model the solar designs. If interested, all organizations should email the company at salesservice@aldelano.com and please include the nature and need of the designs in your area. Each jurisdiction will be announced on www.solarcoldbox.com, where you can explore the company’s technology. 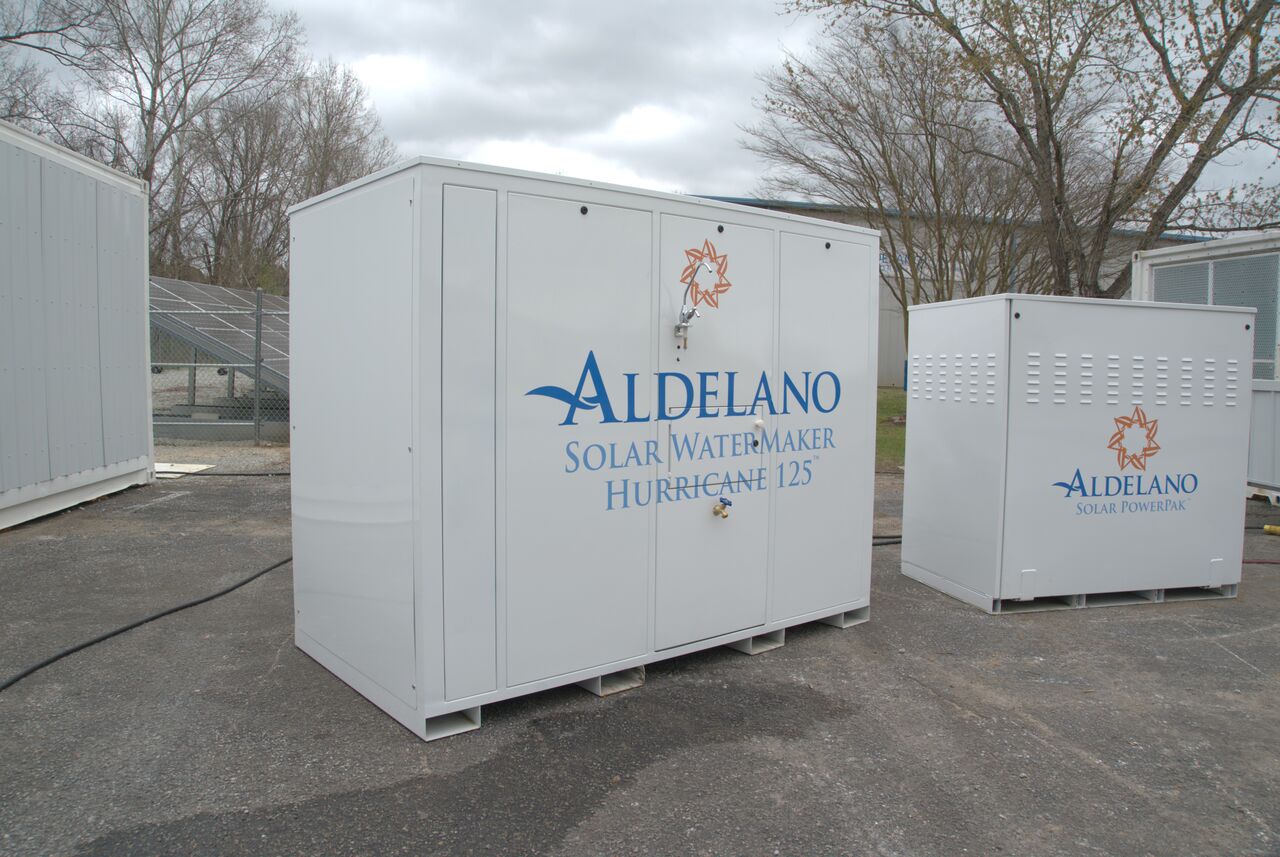 Aldelano Corporation is a global leader in producing the most robust and long-lasting solar products in the market. The company is also a leader in contract packaging for the past 50 years, specializing in refrigerated supply chain solutions. Its plants service major Fortune 500 clients such as Kellogg’s, Procter & Gamble, Sunny Delight, American Airlines, Toyota, General Mills, Red Bull and Verizon. Aldelano has built a reputation on dependability and trust and has received numerous awards and accolades. Business acknowledgments include the National Minority Supplier Development Council (NMSDC’s) Corporate Plus distinction, the President’s Achievement Recognition Award, City of Los Angeles Minority Global Export Firm of the Year, Businessman of the Year and the Award of Excellence from the United States Department of Commerce. Aldelano Solar Cold Chain Solutions was inspired by an internal issue at the company’s packaging headquarters, where a solution was needed to find a quick and easy way to provide cold storage. Once the Solar ColdBox was developed, the company realized the potential the simple solution could have around the globe.

Al Hollingsworth is a business leader, international speaker, minister, author and owner of the Aldelano Corporation. A successful entrepreneur, Hollingsworth’s passion lies with helping others succeed in the visions, dreams, and ideas God gives them. Hollingsworth lobbied in Washington during the civil rights movement and opened the door for disadvantaged businesses to compete for government contracts, becoming one of the first to receive a contract through the 8(a) Program. In the early 70s, Al formed the Black Business Man Association in California with three local entrepreneurs and acted as the association’s president. The group worked with their local government and traveled to Washington D.C. several times a year to meet with congressional and state representatives. Hollingsworth worked closely with California’s Gov. Michael Brown and later became the Commissioner of Economic Development for the State of California. He recognized that youth would soon face an economic crisis and wanted to give them an alternative to gangs, drugs and hopelessness. In response, Hollingsworth and his wife, Hattie, founded the internationally-acclaimed, Christ-centered B.O.S.S. The Movement youth success training curriculum and its adult component, the Vertical Leap Seminar. The programs’ biblically-based training principles have been embraced throughout the U.S. and around the world in regions such as Japan, Kenya, South Africa, Switzerland, Ghana, Jamaica, Italy, Ukraine, Brazil, Belgium, the Philippines, Indonesia and the Bahamas. The movement has trained thousands on marketplace ministry ethics and applications. Hollingsworth also served on the board of regents for Oral Robert University and on the board of directors for Promise Keepers and Save Africa’s Children.